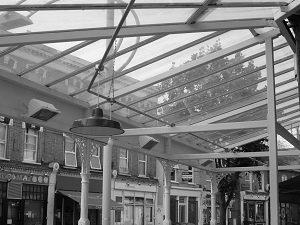 The glass panels of the shop roof  had evidence of not having been cleaned for many years as they had algae all over. they also had moss growing on top as well as branches .The debris and soiling that was on the glass was deeply impressed and so required thorough scrubbing.

The difficulty in the job, was the location of the shop which is on a busy thoroughfare, where numerous people pass by . This presented a hazard, but was overcome. Another difficulty with the job was the glass access.  Reaching the high up glass roof window panels and scrubbing them was also compounded by the extreme turn in the weather.Because of these reasons Spick and Span window cleaners decided to clean the windows using a three stage cleaning process, working at different times during the day, and using a variety of glass cleaning techniques. The dirt and algae on the windows was first of all aggravated from the panes by using a soapy  glass washing solution and micro-fibre window cleaning pad on a carbon fibre  pole. After loosening the dirt this was then rinsed off, the final process involved repeating step one, but this time squeegeeing off the residual dirty water.After communicating well with the owners during this period of time and working within their parameters, Spick and Span window cleaners were highly praised for their work and willingness to go the extra mile in helping them with the launch of the new business venture.

A request was made by the owners for an invoice to be made out in the company name, this was met, and advice was sought from Spick and Span window cleaners about the  maintenance of the shop windows in the future as well as the possibility of  Spick and Span providing window cleaning on a ongoing basis After the jobs completion  an invoice was sent electronically.