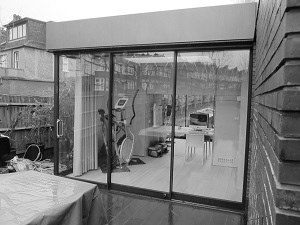 Today Spick and Span window cleaners helped a family in East Dulwich get some closure to what had been a long episode of building works and renovation projects within their new home.

The five bedroom Edwardian house situated near Alleyn’s school in East Dulwich has for  many months resembled a building site,much to the dismay of the owners as builders ran over schedule due to extremely wet weather, but the finishing touches were added today when Spick and Span arrived and the windows were cleaned.

The main part of the renovation , and the area that had not been cleaned since it’s construction was the kitchen extension at the rear of the house. The kitchen extension all of which is glazed with floor-to-ceiling, two by two metre, panes of glass and three glazed bi-folding doors and has glazed panels in the roof was in desperate need of cleaning, as cement splashes were on the glass, the metal frames of the extension also required scouring due to the the presence of dust and other debris. After Spick and Span window cleaners cleaned this glazed section of the house the homeowner remarked of the improvement.

At the top of the property were two bedrooms that between them contained   four velux windows, but only three were accessible, these were cleaned by using a damp cloth  to collect dirt and a dry cloth to remove any smeary marks that remained.

The middle storey contained the master bedroom which had four casement windows the upper section of which contained leaded glass, this glass was cleaned with damp micro fibre cloths, as well as a T- bar  window cleaners mop a squeegee and scrim.

The glazed roof lights of the kitchen extension were cleaned from out of one of the back bedrooms, after the sash windows in those rooms were cleaned  and after that the opaque, frosted, glass of the bathroom was cleaned.

The main lounge area of the downstairs of the property mirrored the master bedroom, having casement windows partly containing leaded glass, these were treated as the windows in the master bedroom, and were washed using traditional window cleaning methods.

All that was left to be cleaned in the inside were the  stain glass windows that  surrounded the front door, these were very gently cleaned to prevent them from being damaged.

The external  windows  at the top of the front and side of  the property were left spotless after they all were brushed  clean with purified water and a carbon-fibre window cleaning extension pole, the lower windows were cleaned traditionally with the use of  a small ladder.